Why do we use thermography in our office

Most of us are familiar with the stories of how Hippocrates would smear mud on people’s bodies to see whether certain areas would dry quicker than other and thus be warmer meaning something would be up. Even chiropractors in the early age of chiropractic used this knowledge and yet, quite logically, had to find different ways to test this on the people they were looking after. In the beginning they used the back of their hands to find so-called “hot spots.” These hot spots were indicators that the spine was impinging the nerves that run through the spine and leave from small openings between the individual vertebrae. The nerves, D.D. Palmer – the founder of chiropractic, said, are responsible for heating the body and if they are impinged due to subluxations of the spine this shows up as hot spots. A little later they noticed that besides hot spots there could also be “cold spots.” Hot spots were theorized to be indicative of acute spinal problems and cold spots were due to long standing (i.e. chronic) spinal problems. This is one of the most fundamental principles for chiropractors throughout its history to detect vertebral subluxations.

With time instruments were developed to measure exactly the temperature of the skin alongside the spine. Through the specific design of their machine, they were able to compare the temperate of either side of the spine and they would see the needle spring sharply from one side to the other. They called this phenomenon a “break.” This break, they reasoned, was exactly where the nerve was impinged by a misalignment of a vertebra, i.e. the subluxation, which caused friction of the electrical energy flowing through the nerve measured by their instrument. They called this instrument the Neurocalometer (NCM), that which measures the temperature of the nerves. This, for those early chiropractors, was revolutionary for the effectiveness, reliability, and reproducibility of their methods of detecting vertebral subluxation and started a trend in chiropractic to analyse the spine and nervous system with objective measures. 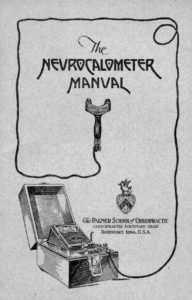 Still many chiropractors nowadays use this approach in their everyday practice, yet with updated technological devices, updated understanding what is actually being measured, and with new interpretations of how this information can be used for clinical decision making. We know now, for example, that we don’t actually measure any friction of electrical energy in the nerves, but the heat being emitted from the blood circulation in the skin, which is closely monitored and regulated by a part of the nervous system, called the “sympathetic nervous system.” Knowing more about the nervous system as a whole we learned that the initial theory of the “break analysis” may not explain the entirety of vertebral subluxation and that we needed to look more globally and spot “patterns” of heat distribution over larger parts of the skin of the spine. When people were measured at the same time each day for consecutive days and consistently showed nearly identical readings, they were said to be “in pattern” and in need for an adjustment. This practice was inspired by advances in technology allowing these chiropractors to graph theirs measurements so comparisons could easily be made between before and after an adjustment and to track the progression of people being under long term care. These “patterns” really stimulated the evolution of thermographic analysis to newer and higher levels.

The presence of a person-specific thermographic pattern is thought of to be indicative of a lowered state of neurological adaptability affecting the thermoregulation of the skin. As we are living in an environment that is constantly changing, our bodies are equipped with a “master control system” that monitors the external environment and the internal needs of the body and in response to these it directs bodily functions to meet those needs. This “master control system” is the brain with its vast network of nerve travelling through the body. Now, if a vertebral subluxation is present it interferes with the function of the nervous system which will be expressed as the lowered state of adaptability observed as the “pattern.” In a practical sense, the presence of a pattern thus shows the need for an adjustment whereas the absence of the pattern tell us no adjustment is needed.

Thermography has a rich history from its use by the early chiropractic pioneers, including the founder, to the advances and evolution by modern technology and revised neurophysiological knowledge. Its reproducibility and the ability it provides us to track the progress of people under care is what makes this technology invaluable to the everyday use of it. Every time you will come into our office we will measure you and let this information guide our clinical decision of what is necessary in that moment.